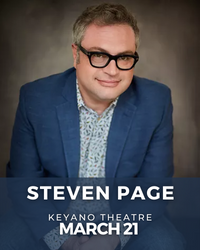 Back by popular demand... Canadian singer and former Barenaked Ladies front man Steven Page!
For more than 20 years, Steven Page was the recognizable baritone leading the way for Canadian rock group, Barenaked Ladies. After leaving the band in 2009, Page embarked on a successful solo career and has released five albums of original music. In 2017, the band was inducted into the Canadian Music Hall of Fame.