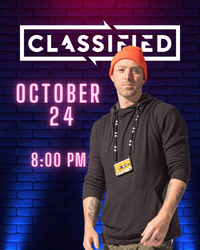 In 2022, Classified will offer fans a stripped-down, acoustic take on some of his biggest and most celebrated hits over the past 20 years. Classified is excited to finally bring this new style to the stage. Although different from how shows have been performed in the last 20 years, he has been releasing acoustic versions and performing them for a while now. The Retrospective Tour will be a personal and intimate show, allowing the audience to get the stories behind the songs and hear some of your favourite songs in a new way. Classified can’t wait to share and provide this experience with you!

Classified is one of Canada’s most respected and successful rap artists, producers, and songwriters. To date, he has released 18 studio albums and joined forces with some of the world’s most prominent Hip Hop artists including Snoop Dogg, Raekwon, Royce da 5’9, DJ Premier, Joe Budden, Brother Ali, Maestro Fresh Wes, and many more. With an inherent and candid ability to break down the barrier between performer and audience while “leading the vanguard of East Coast hip hop” (Chronicle Herald), Classified is one of the most influential hip-hop artists in Canada with over 150 million streams globally, the multiple JUNO Award winner has a combined 24 nominations and 8 wins between the MuchMusic Video Awards, JUNO Awards, and East Coast Music Awards. Come experience the Retrospective Tour!